The replacement rear disc arrived (via a circuitous route) and I spent the best part of today tearing into the rear wheel of the old green Trophy.

Biggest problem. Why did Triumph introduce so many new fixings?

Call me old fashioned, but I bought most of my tools in the 70’s and they’ve stood me well ever since.

So now I’m the proud owner of a set of large Torx sockets and a spanking set of (Halfords) 6-12mm hex sockets.

The job was really easy (as long as you have an impact driver), I fitted new rear pads and the new disc. How to re-align the rear wheel – well I think I’ll have to re-read the manual as it’s not as obvious as it should be.

There’s no spark on #3 and I suspect the ignition coil. I’ve changed the plug and swapped the igniter circuit so I’m pretty sure that the coil is dead. I’ll swap one from the Daytona 900 just to make sure before heading off to eBay to look for a replacement.

Well, the Daytona coil did the trick! I must admit to being a little surprised as there’s not a lot to break in an ignition coil. Still, now its running on all three cylinders. The rear brake is still sticking and I suspect that I’ll have to take the caliper apart and clean it. The bike’s been used and sitting with worn pads for a while which exposes a large area of the piston to the outside world. Fitting new pads means that pistons need to resume their life “indoors” so they’ll probably need a good scrub before I refit them.

The wheel alignment is easy when you read the instructions…

Rear brake fixed. Bit the bullet and took the caliper to bits, removed pistons and cleaned with Scotchbrite and brake fluid (now nice and shiney). Removed the two “dust” seals and cleaned the square groove with a toothpick. Refitted seals, cleaned out caliper, refitted and flushed through with new fluid. Job done!

I don’t really enjoy riding this bike. It’s too much like the Trident, on which I feel far more at home.

So it’s for sale on www.nirvana-motorcycles.com

I went to see Roger Waters at the O2 on Monday night (19th May). If you’ve not been to the O2, it seats 24,000 and is a bit like an indoor football stadium. Even so, the concert was so LOUD that it actually hurt at times (maybe I’m just more susceptible to certain frequencies – must be an age thing)

The concert finished at about 11pm, we walked back to Chris’ place in Greenwich (walked right past AllBike Spares as it happens) which is where I’d left the bike.

It was one of those sunny but cold days. I had taken all my “winter” kit; HG jacket and quilted trousers, neck tube etc BUT FORGOT my winter gloves. It’s a while since I’ve ridden a bike without heated grips and I’d forgotten just how miserable it is riding with frozen fingers. By the time I reached Clacket Lane Services on the M25 my fingers were numb and hurting. The fuel light came on at Leatherhead so I went down the A24 (towards Box Hill) and stopped at the petrol station there. My fingers were so cold that I couldn’t get my credit card out!

So Monday I drove around the entire length of the M25, home (Wokingham) to work (St Albans), work to Greenwich and Greenwich back to home.

The concert? I’d forgotten just how much egotistical, political, self-centred crap that Waters put out in the 80’s. The second half was brilliant (DSOTM + encores) and probably worth the ticket price on its own.

I reckon that IE6 has a problem with automatically resizing pictures and frames.

My post on riding Triumph 900s uses some pretty large pictures which all get reduced to fit on Firefox.

Good old IE6 puts up this: 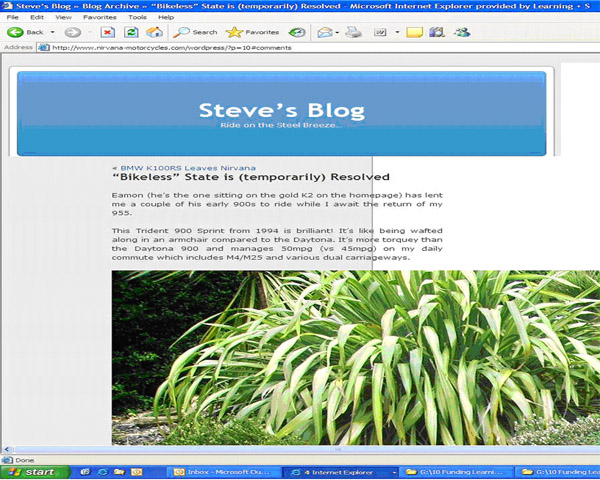 This is the original size of the picture of the Trident Sprint.

Eamon (he’s the one sitting on the gold K2 on the homepage) has lent me a couple of his early 900s to ride while I await the return of my 955.

This Trident 900 Sprint from 1994 is brilliant! It’s like being wafted along in an armchair compared to the Daytona. It’s more torquey than the Daytona 900 and manages 50mpg (vs 45mpg) on my daily commute which includes M4/M25 and various dual carriageways. 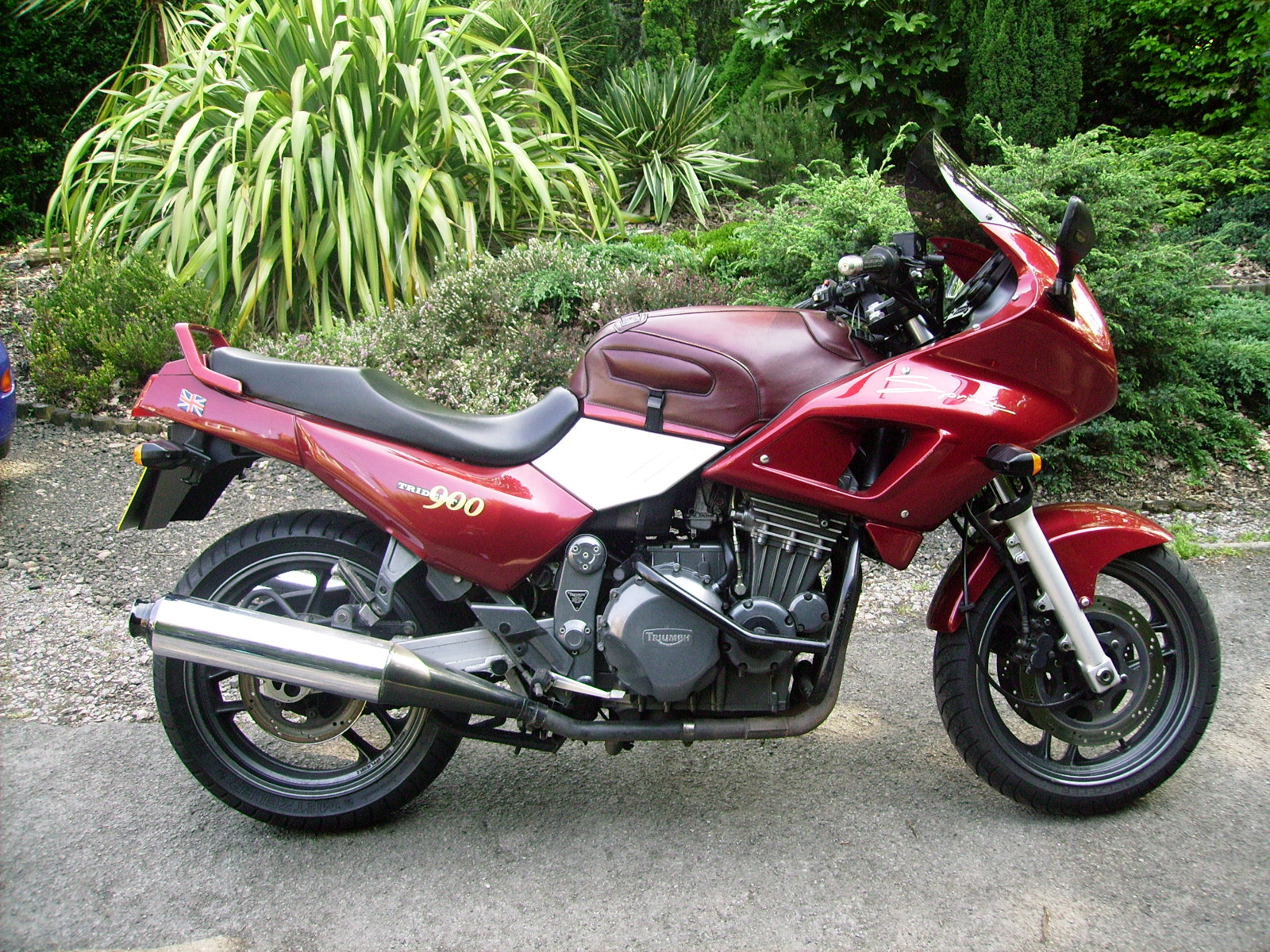 This bike has 44k miles on the clock and took him to Poland and back when he was young and free.

Also new in my barn is a Trophy 900 which may well be better suited to the M25 grind as it offers better weather protection and the “Trophy” engine map (more torque at lower revs hopefully). At present it needs a new rear disc, a set of plugs and an MOT, so I’ll have a crack at that next week and let you know what I think of it. The disc is coming from AllBike Spares in Greenwich – handy for me as my son lives there and he can collect it for me. I’m off to the O2 on Monday to see Roger Waters so I’ll pick it up from him then. 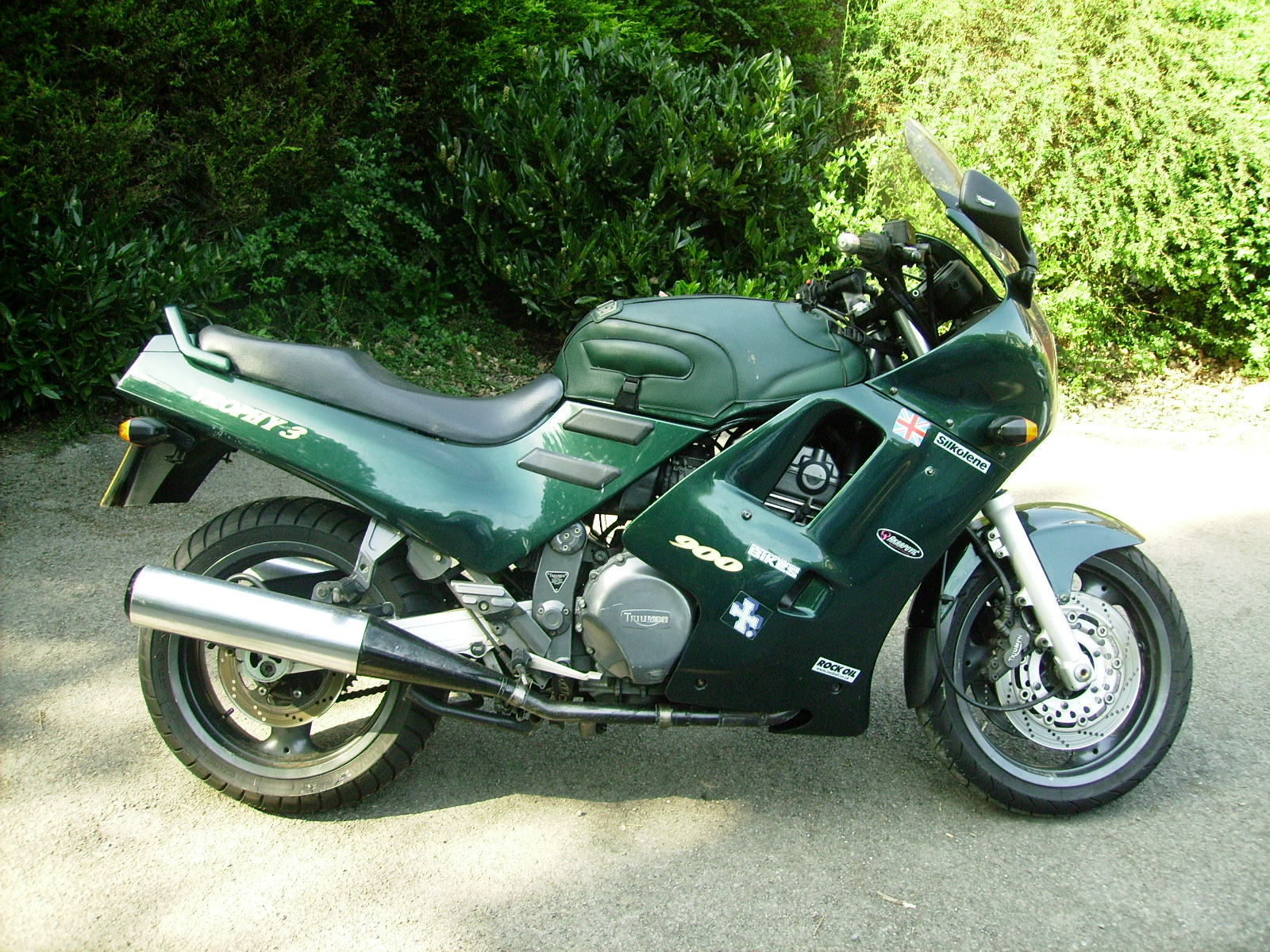 To make up the set, here’s the 57k miler Daytona that I have been riding for the last few weeks: 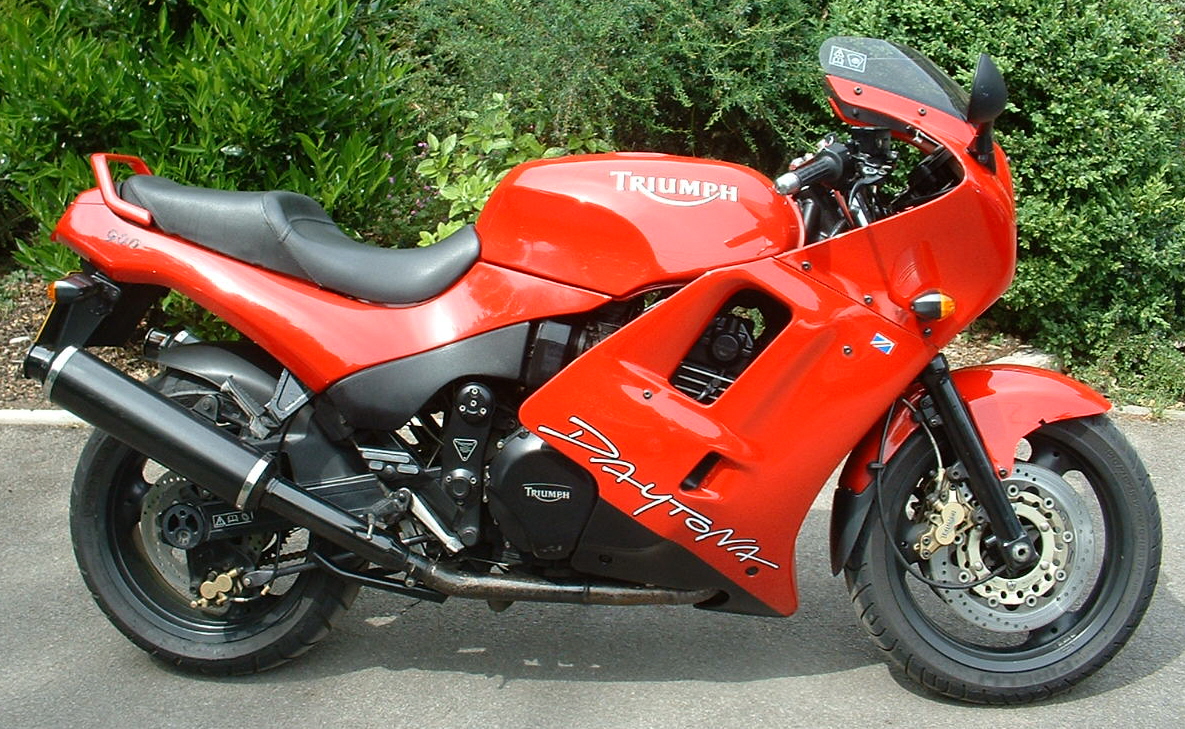 Anyone care to lend me a Tiger 900 and I can compare Hinckley’s best!

Waved goodbye to the BMW this afternoon as Phil Millard of Acceleration Collection and Delivery Service arrived to take her to sunny Scotland. He’s a professional bike transporter and came recommended by Dave Hewitt (Biffta) on the vintage Honda site www.honda-sohc.co.uk. We had to take the luggage off (again) to fit the bike in the van; this will give the new owner some good practise at fitting and removing the luggage as there’s a definite knack to it.

Here’s Phil in his van with the bikes: 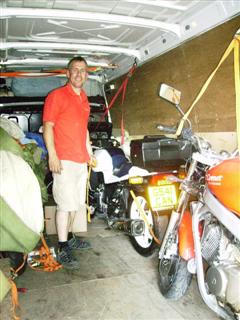 He can be contacted on www.AccelerationCADS.co.uk

Does anyone out there see this? 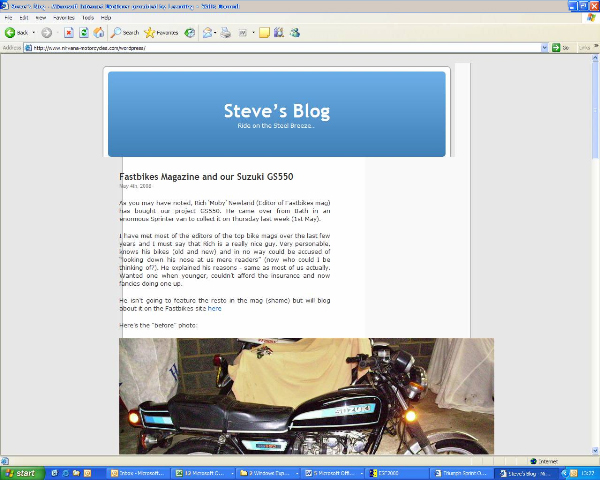 [EDIT 10th May]
Could be the screen settings.

Sooner or later I will recount the saga of my Triumph Sprint ST955i. But for now, let’s just say that I’m commuting from Reading to St Albans every day in a car…

Rinding a bike round there every day is great (especially in the weather that we’ve been having); I don’t go mad but don’t drive along in lane 1 at 55mph either.

Riding a bike you know that you always have what it takes to squirt away from any potential danger with a mere flick of the wrist. My 98k mile Focus is different. It’s not slow, but I don’t like to go “fast” in it, which means lane 2 at about 75 most of the time. At that speed the M25 can be very threatening as the trucks move out without looking or signaling and BMW-man is 2 feet behind you, on the phone and in a hurry.

I can talk about BMW-man coz in the 90’s I was one. I had a succession of company 5-Series cars and was usually the one in lane 3 (on the phone)…

Anyways, a solution to the “bike-less” status could present itself this weekend. I promise to write about my Sprint (with pictures) at a later date.

As you may have noted, Rich ‘Moby’ Newland (Editor of Fastbikes mag) has bought our project GS550. He came over from Bath in an enormous Sprinter van to collect it on Thursday last week (1st May).

I have met most of the editors of the top bike mags over the last few years and I must say that Rich is a really nice guy. Very personable, knows his bikes (old and new) and in no way could be accused of “looking down his nose at us mere readers” (now who could I be thinking of?). He explained his reasons – same as most of us actually. Wanted one when younger, couldn’t afford the insurance and now fancies doing one up.

Here’s the “before” photo: 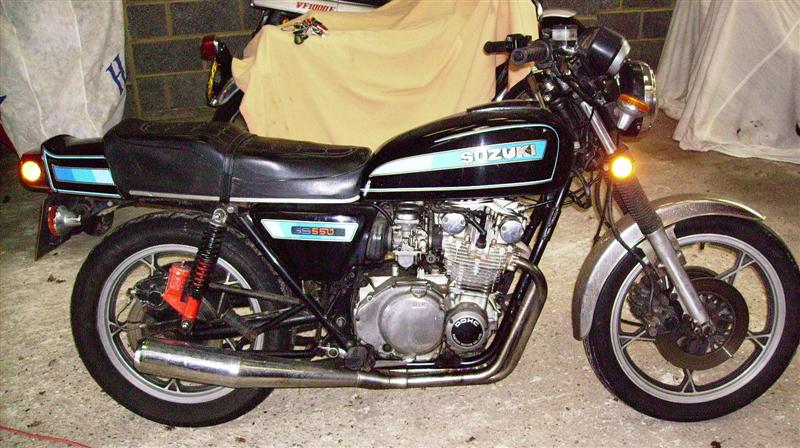 I promised a picture with the luggage fitted: here it is. 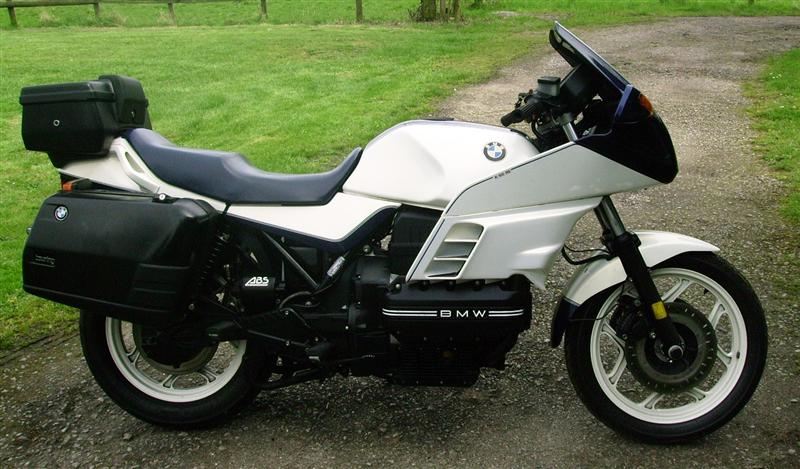 Honestly, how difficult can it be to take a photograph of a bike like this? Answer: very difficult. Your average cheapo digital camera (like the one I have) can’t handle the white bodywork and black engine. This is the best of about 20 shots – this one was on auto but in the shade behind a barn. I tried all sorts of sun/shade/fixed aperture shots but this one was still the best. Any advice on how to do this (without spending zillions on SLR cameras) welcome.

The Nirvana Motorcycles site has been up and running since May 2007 and I thought that it was about time we stopped freeloading and bought our own server space. Up to now, we have been sharing disc space and bandwidth with my son’s website www.tubaman.org.uk. A typical 21-year-old, he never has enough time to update his site and it is usually out of date. He did, however, have enough disc space to host our motorcycle site (until now).

We have recently seen large bandwidth demands which were mostly my fault as a 2Gb per month limit is easily blown when visitors start watching the cutaway engine video (in hi-res mode). One or two large excess bandwidth bills from my hosting company and the fact that we were running out of disc space lead me to think that it was about time we hosted our own site and stumped up for some serious server facilities.

Having our own host allowed me to install MS FrontPage Extensions, which in turn allows me to add some interesting webtools to the site:

If anyone has any suggestions for a more motorcycle-oriented counter (has to be a GIF file), let me know.