I bought this bike on 28th September 1977 with the help of my great mate Paul Churcher. I had admired a black 500/4 that was owned by a member of the Bedford Eagle Motorcycle Club for many months and Paul had been on the lookout for me. I don’t know where he found this (he may) but the two of us went round to see it one evening and I had a short test ride. It was running on three cylinders but every now and then #4 would chime in and away we went – it was brilliant. Paul reckoned that an ignition fault would be pretty easy to fix, so I offered the guy £350 and rode it home. 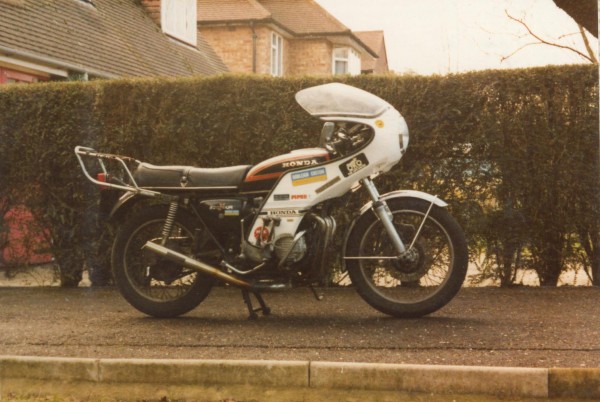 To start with it was fairly standard, had 20,855 miles on the clock and needed a bit of TLC (not to mention a good service…)

Over the next 5 months, I fixed the ignition and brakes, fitted finned covers, crash bars and the Rickman fairing, added the rack, an MOT, tax and insurance and on 21st February 1978 we hit the road! 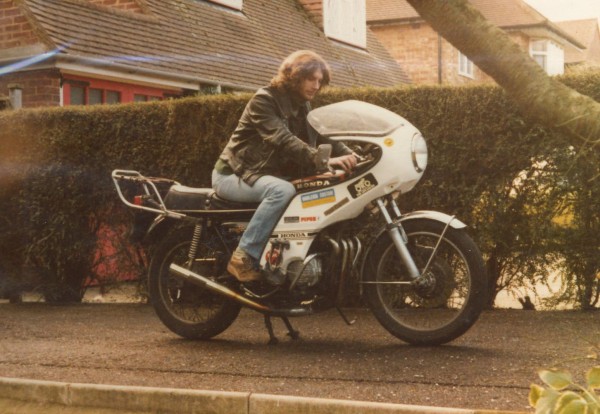 I soon discovered that a neglected bike would require ongoing care as first the cam end cover oil seals started to leak (only 48p each but left oil all over my legs as it ran onto the cylinder head and was blown backwards by the slipstream).

Then the starter solenoid melted (it was full of water). £7.50 for a new one and a new set of fuses.

This was all in the first 2 months – but I was using it every day and had clocked up 3,000 miles by then.

In May 1978, I bought a CB550K3 seat (£15) and tank (£25) from a guy in Portsmouth who had bought a brand new K3 and was converting it into a cafe racer. The tank was slightly larger than the original and the seat hinge/latch were in a slightly different place but hey, I was doing engineering at Uni and we had access to a complete workshop staffed with skilled technicians!

Summer 1978 was supposed to be our Spanish holiday. One of the guys in our shared house was from Madrid and had “invited” us all down. Unfortunately, a trip to Camber Sands in June of that year resulted in a cam chain tensioner failure that caused the cam chain to gouge aluminium from the inside of the cases, which blocked the oil filter, which destroyed the main and big end bearings. The engine didn’t sieze, but just got harder and harder to rev as by that time the pressure release valve in the oil filter had opened and the oil pump was busily pumping a cocktail of engine oil and aluminium shavings around the engine.

So no Spanish holiday then. Just a big receipt from Parks of Lewisham for parts: 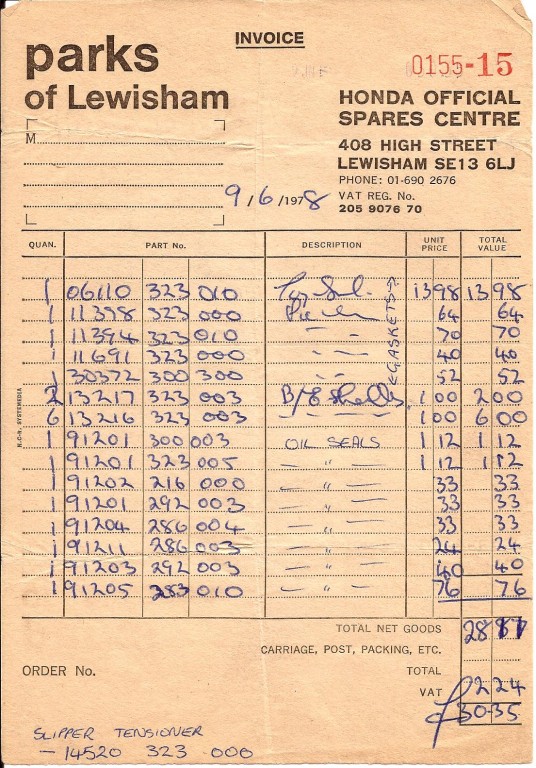 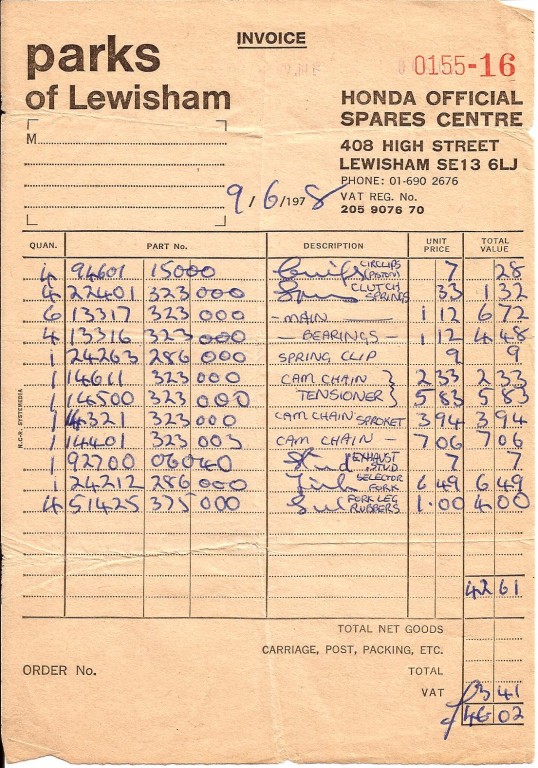 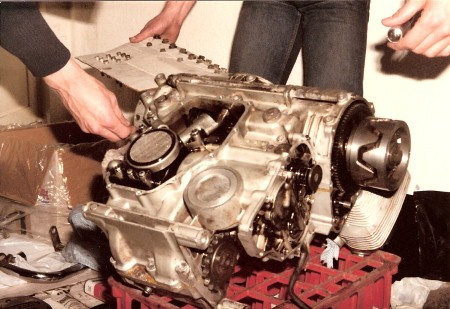 This picture shows me and Nik working on the engine. Having recently rebuilt the top end, I didn’t want to open it all up again, so carried out all the work by removing the bottom crankcase. Note the method used to store and recognise the various crankcase bolts. Also note custom (student) engine workbench. Mileage now 25,400

For the next 6 months and 5,000 miles I did nothing but change oil, filters, worn footrest rubbers…   and ride it.

At the time I was President of the University Bike Club and negotiated a discount at our local Honda dealer Redhill Motors (more about them later). The guys in the parts department always (jokingly) complained that as we always came in with our helmets on, they couldn’t check our IDs. So we had these IDs made up: 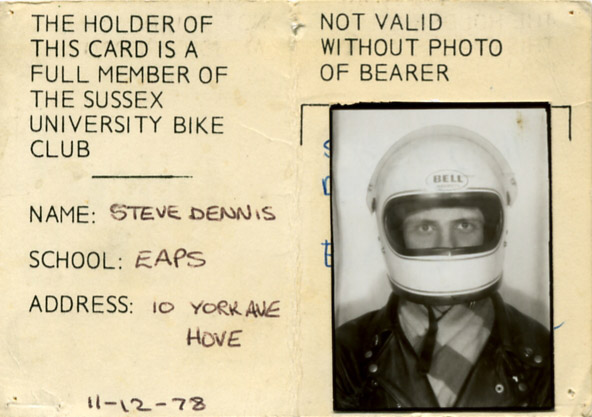 As there was no Spanish holiday, Beverley and I decided to go camping in Cornwall. We loaded up the bike (two tents – her father insisted) and headed off into the rain. As we crossed the “border” into Cornwall, the sun came out and stayed out for the duration of our stay. Here we are loaded up for the journey home. 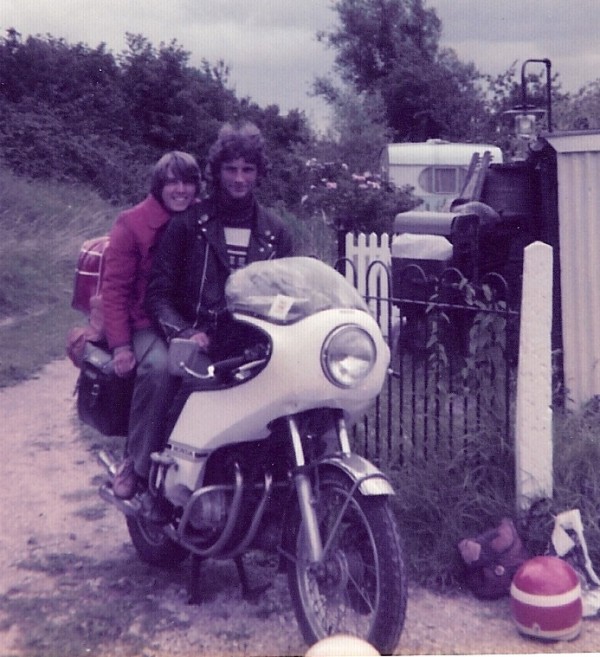 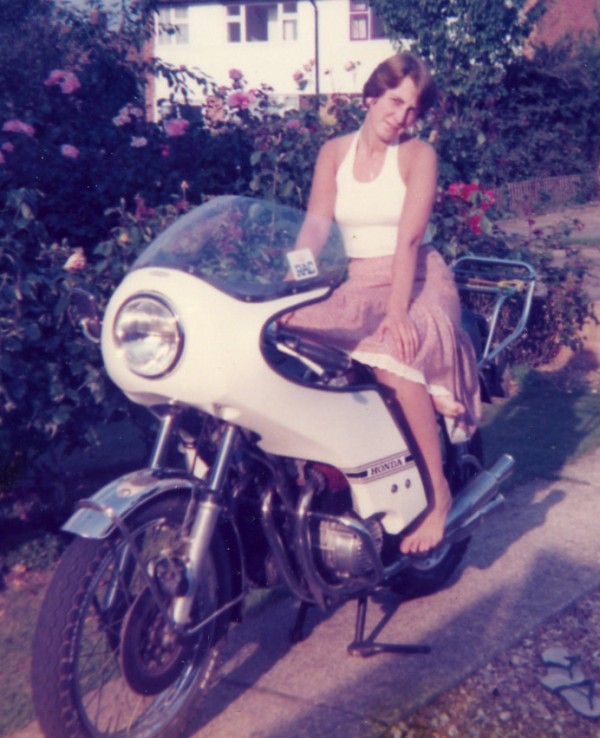 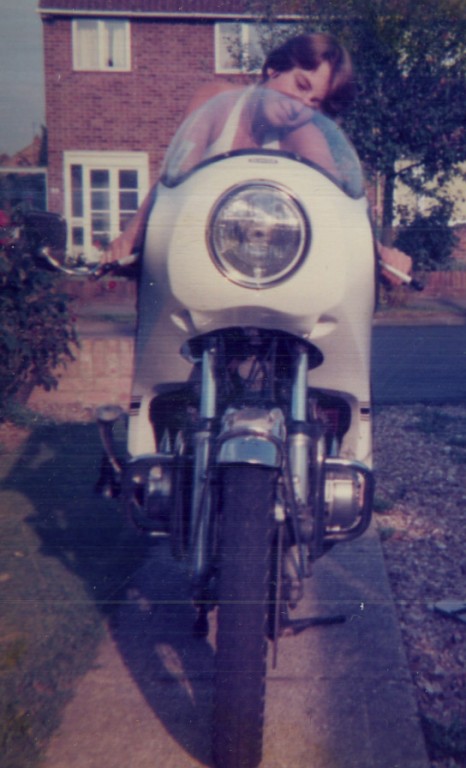 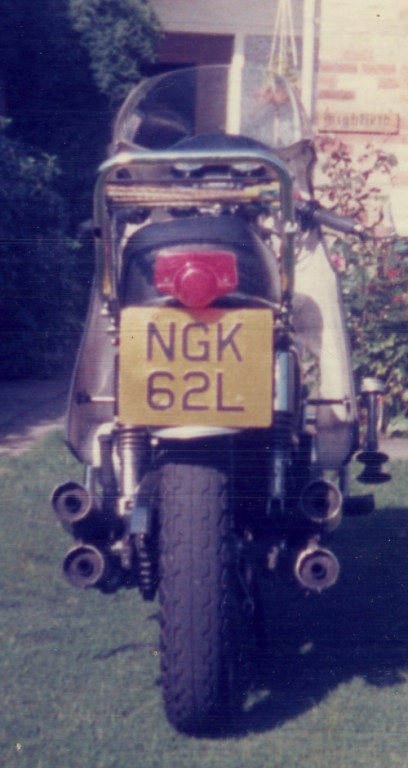 January 1979 was cold and icy. Nik was riding my bike while I was away in Derby (with Beverley) and discovered exactly how bad those stainless discs were in the rain and sleet. A car pulled out in from of him on a mini-roundabout and he T-boned it. Bent forks, broken headlight and fairing screen, scrapes on the exhausts (where he had layed it down). The estimate from Redhill Motors in Brighton (our Honda dealer) was £235. It took a couple of months to grind through the insurance companys but in May 1979 I finally got the go-ahead to get the repairs done. 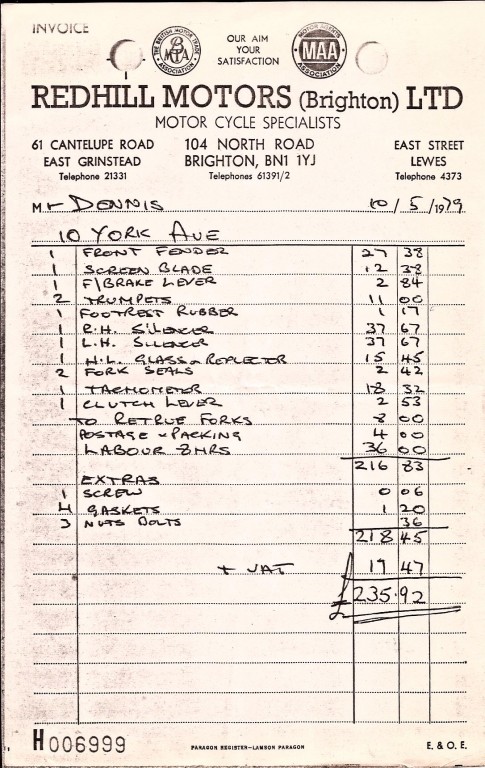 Now, as a regular at Redhill Motors, I knew that they had a brand new sexy Piper 4-1 exhaust hanging in their warehouse. It was priced at £64 and I suggested that they fit that in place of the two standard Honda exhausts. Mileage was now 34,876 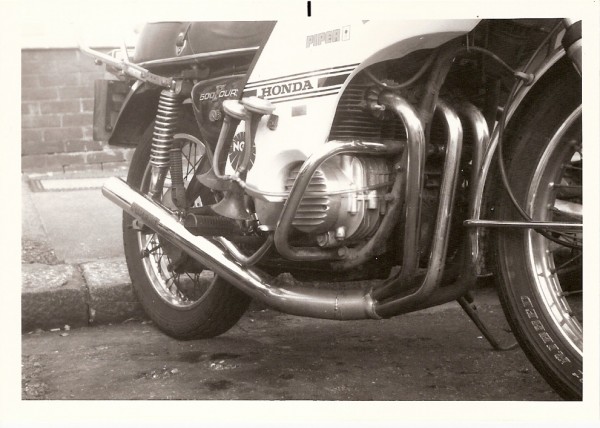 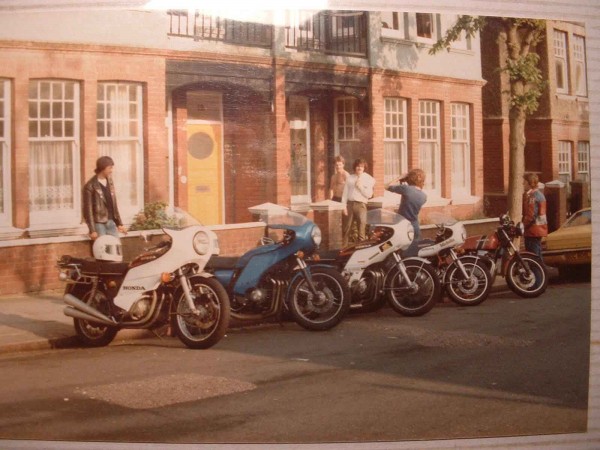 The line-up during the summer of 1979

By autumn 1979 I was working for Racal in Bracknell but still “commuting” to either Bedford or Derby most weekends. The service record shows  oil changes every 1500 miles, tyres, chain and sprockets etc

As a salaried employee, I decided that it was about time I bought a newer bike. I also fancied something a bit quieter…