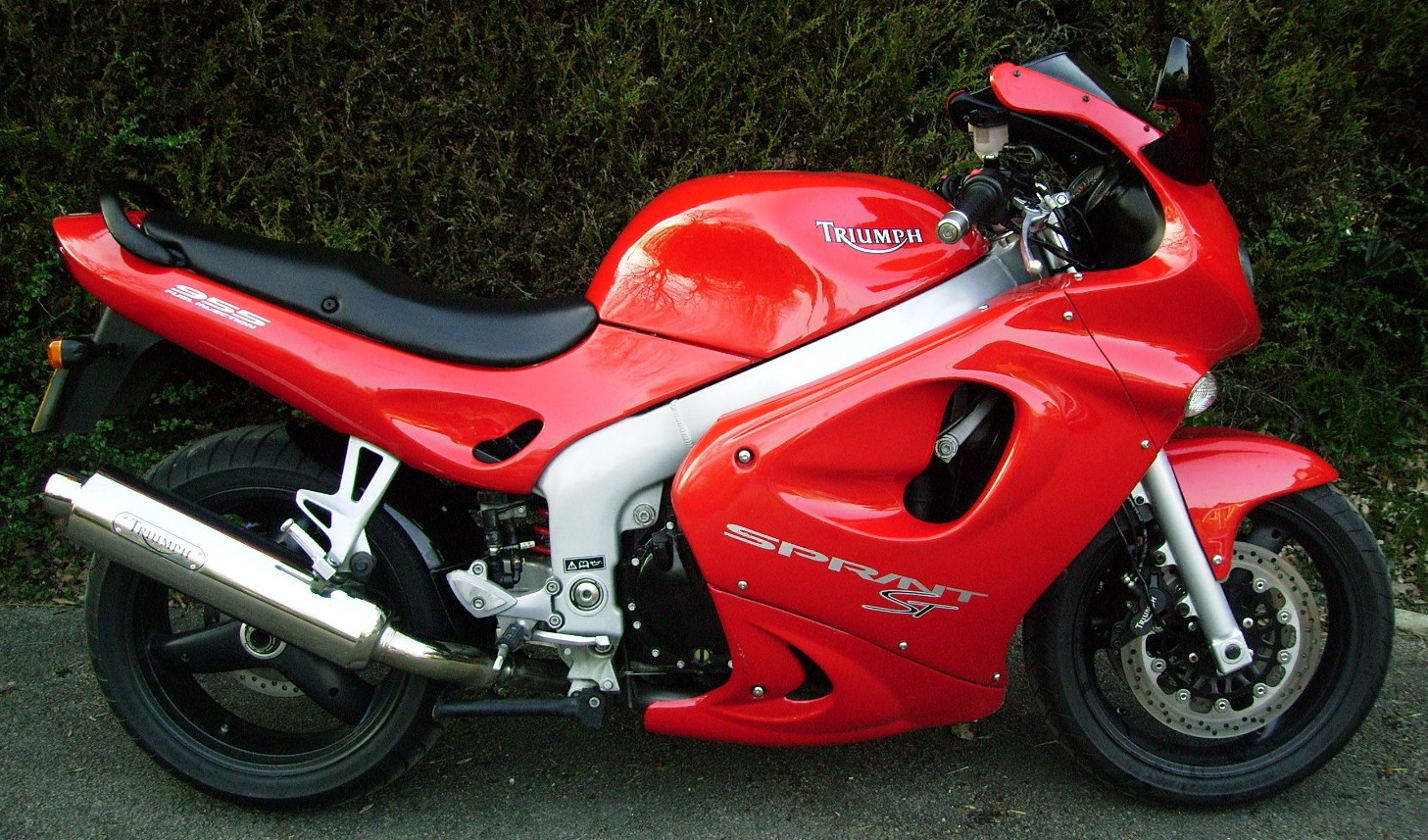 I had just started a new job, finished a meeting in Brighton early and was hooning along the A272 when the bike suddenly ran onto two cylinders. I decided (stupid) to keep going and about a mile later there was a bang and a noise that reminded me of the days when we used to run our bikes with no exhaust. I thought I’d split the exhaust or something so stopped outside Infinity in Farnborough and called Carole Nash to get me home.

15 minutes it took the guy to arrive (add smiley here)

He arrived with a motorcycle recovery van, fully equipped with tools as well as ramp. He didn’t just pick up the bike but decided to see if he could fix it. Took the tank and the airbox off and the problem was immediately apparent. No.2 (middle) ignition coil had blown out (there’s a safety valve built into the bit that screws onto the rocker cover)

Unscrewed the coil to find that there was only the top bit left! The spark plug was rattling around in the “tunnel” and was missing the earth electrode.

This is what we found: 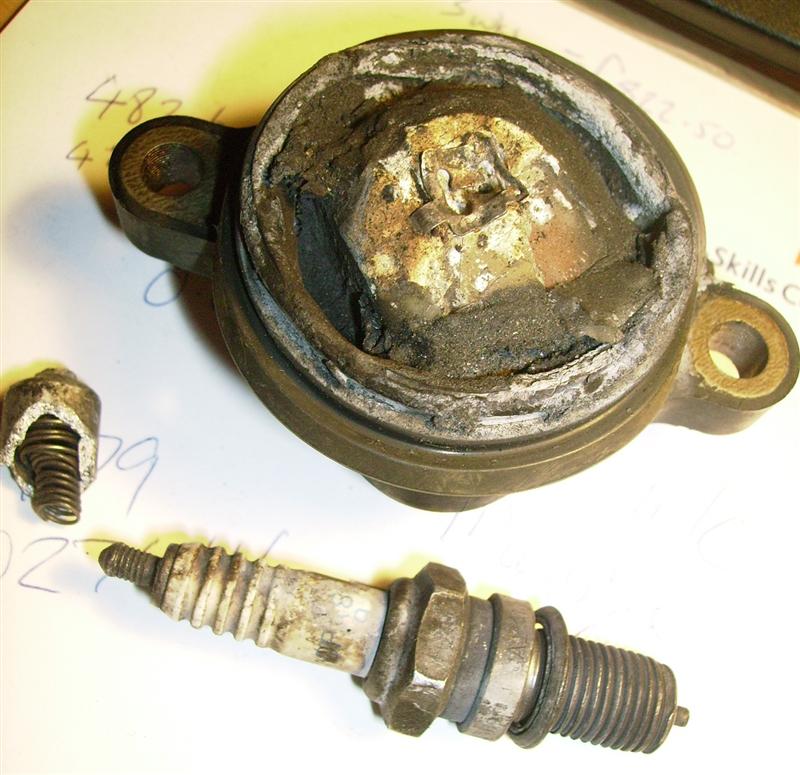 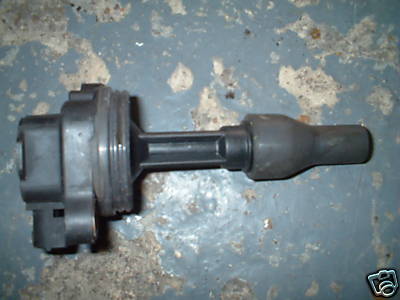 The rest of the coil, a mix of copper wire, plastic and aluminium had gone into the engine…

So off home in the van.

I spoke to my favourite Triumph Tech and he admitted that he had seen something like it before and that had been a self-unscrewing centre plug as well. I claim innocence as I replaced the plugs at the 24k service – that was 11 months and 10k miles ago, so I can’t have left it loose. In future I will check my plugs regularly…

He also said that if I was lucky and as most of the ignition coil was copper wire and plastic, it may have all gone out via the exhaust valve. Looking down the plug hole with a torch I could see the top of the piston which looked OK (ie it was black and not dented or smashed), so bought a replacement ignition coil and plug from Sandy at Sprint Manufacturing. The plug would not tighten as the threads in the head had stripped so it was off to my local motorcycle engineer to put an insert in the head. This he did without removing the head (clever eh?) and subsequently put it all back together. It turned over on the starter but would not fire up and there was a suspicious rattle coming from the middle cylinder.

Suspecting that there was still something in the cylinder (ie the remains of the ignition coil had not all exited via the exhaust), there was no alternative than to remove the head and clean it out. He also ran a leak-down test and discovered that all four valves were leaking quite badly and would have to be re-lapped. Head off and all the bits “hoovered” out, valves lapped, new head gasket later: still won’t start and a bad rattle coming from the engine.

Suspect that the pounding of the (albeit soft) debris in the cylinder has trashed the big ends and the only solution is to take the engine out, turn it over and have a look. Hopefully no need to take the head off again. On the other hand, with the amount of work involved (and costs mounting), maybe a low(er) mileage engine from a breakers would be a shortcut to a fix.

Saw this on eBay from R&C in Colchester. They trade on eBay as “motorcycle_recycle” and have 19,000+ feedback at 99.6% positive. That’s some operation! 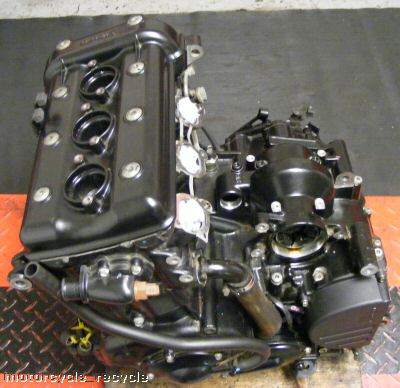 Picked it up Thursday (15th May) which saved the £100 delivery charge and delivered direct to the shop.

Rob Thorn in Finchampstead has had the motor now for a couple of weeks and (in between working for Bulldog Triumph) reckons that the engine is from a Daytona as it has a cam position sensor on the cam cover that was never fitted to the Sprint.  I’ve tried asking what the obvious differences are on various forums but have got nowhere. Charlie Sleathe at Motorcycle Recycle assures me that it did come from a Sprint ST and gave me the VIN of the donor bike.  Andy at Bulldog entered the VIN into the Triumph database and came up with an incorrect engine number.  So the engine was not fitted at the factory – it may indeed be a Daytona engine but hey! – if it fitted in that bike then it can fit in mine!

How many 147 bhp Sprints are there out there do you think?

Rob tells me that the T595 engine is fitted and running.  I’m off over there tonight to try it out.  Will post results!

Picked up my ST/595 hybrid yesterday. First problem was a flat battery. Dead as a doornail (why do we say that? Are doornails ever “not dead”?). Tried to bump start the bike but no luck (can you bump start these bikes with all the various cutouts and “safety” features?).  Jump start off a battery pack, fires up and away we go.
After 8 weeks of riding 100 miles per day on my Trident 900 Sprint, this is like riding a sportsbike!  I feel as if I’m hunched over the front wheel. Boy it’s nice to ride a bike that steers and doesn’t need to be forced around corners!
The wind noise is lower too.  My new Arai Astro R is really noisy when I’m riding the Trident as the touring screen that’s fitted directs the blast into my face, whereas the lower screen on the Sprint directs it onto my chest.
2 miles down the road and it stopped!Symptoms:
I like to think of myself as a bit of a bike/electrical guy as I’ve fixed loads of 70’s and 80’s bikes in my time that have had electrical gremlins, but I was stumped by this. Unlike my old VFR, the Triumph alternator is a single unit with built-in rectifier and regulator.  So the charging voltage comes straight out of the alternator.  What can go wrong?Checking the Haynes manual (surely not…) it seems that the only place that the power goes before going to the battery is the main fuse. Checked and sure enough the main fuse (40A) has blown.Now call me an electronic engineer (which I am) but “main fuse” indicates to me that should this blow, the whole lot will go off! The bike ran for a while as I have described with no main fuse. Replaced and now OK – maybe we blew it while trying to bump start the bike (can you bump start one of these? Maybe question for another time)

It is different from the Sprint as the engine likes to rev more and doesn’t particularly like bimbling along at 2-3k revs. It likes to go at 4k+ revs (must be the Daytona cams in action)

The gearbox is definitely clunkier than the Sprint item and the fuel consumption is the same as before. 250 miles at normal motorway speeds gave 55 mpg which is more or less what I got from the old engine.

If you are reading this after being directed from eBay, Welcome!

The old engine is taking up space in my garage – I’d love to dive into it and have a go but I know I don’t have the time so it’s going to the highest bidder.

If you haven’t come from eBay but are interested, the engine is for sale here

The old engine has gone to a good home and my “Sprint ST595 is running like a dream! As I commute 100 miles/day, it hasn’t taken long to rack up 3000 miles on the new engine. The main problems were with the tickover and slow running. The engine was very lumpy and tickover was all over the place – sometimes spitting back and stalling at the lights (very embarassing).

I booked the bike into Bulldog in Twyford and Chris Power fixed it all in an hour (including test ride!).  He took the tank and airbox off and immediately spotted that the three vacuum pipes in the slow running / tickover circuit were knackered/rotted/split.  “It’s a wonder the thing ran at tickover at all” he said. A throttle balance and CO2 test later and I’ve got a new bike! What a difference!

I deserately needed this fixing as I had my IAM motorcycle test coming up (see separate entry) as well as a trip to France planned for August.

Well, 6000 miles and time for an oil change.
Still happy.
France was good.
Passed IAM.
What more could one want?   (how about some sunshine?)

I’ve sold it.
Mark Vincent spotted it on the Nirvana website, came over with a fistful of cash and rode it away…
I hope he has as much fun with it as I did.
Now on the lookout for a replacement so I’ll end this story here and start another one when I decide what I want.