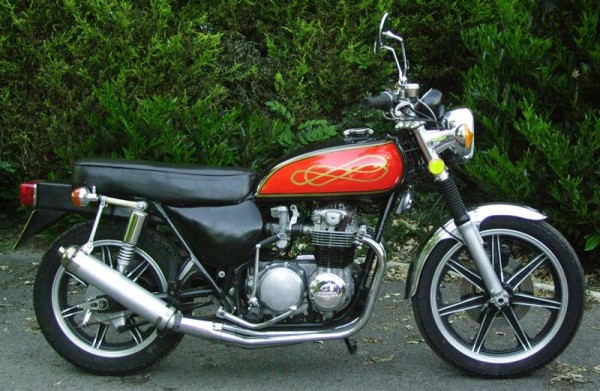 This bike was built by my old friend Frank Cooper in Reading in the 1980s.

This is what he says:

The old Honda was a wreck, bought for £40. The camshaft had badly worn cam lobes due to lack of oil but the bearing surfaces were OK. Also the engine could not be turned over, thankfully this was only due to light rust in the cylinder bores. Other problems were badly worn swing arm bushes, rusted up speedometer; Yamaha wheels not fitted correctly, missing side panels, seat, exhaust and rear mudguard rusted out.

The camshaft was reground by a local firm; more cam followers were obtained from a breaker. Swing arm bushes, gaskets, rings, Motad exhaust etc., bought from the Motor Cycle Parts Centre in Oxford Road Reading. Being strapped for cash at the time, I made what parts I could (more later). Got it first on the road in 1988 after two years, it is now on the road for a second time after a five-year lay up. The mileage I have done at the time of writing is 21,000 miles; total for the bike is at least 40,000. It was featured in the Silver Machine magazine about 1989, this magazine went out of print years ago.

When I was riding my black 500/4 around Reading in 2001/2, I passed Frank one morning going in the other direction and set out to track him down. It was the first 500/4 I’d seen on the road for many years. I eventually found him on www.sohc.co.uk – I think his username was “Old Boy”. We rode around a bit over the next few years; Frank had a Suzuki SV650 by then and had decided to retire and wanted to get rid of the old Honda. I offered to take it off his hands (as you do…)

Frank has his own website, on which he has described his modifications to the bike. He’s an electronics engineer and also very good at fabrication (both in metal and fibreglass). His description of the work that went into this bike can be seen here:

After years of searching, I found a copy of the old Silver Machine magazine which I gave to Frank so that he had a more permanent record of the years he spent with this bike. I have scanned the article and will endeavour to put it up on here. The original was all monochrome (black and white to you and me) with “photocopied” photographs – very poor quality.

In May 2013, “Silver Machine” left for a new home with Tom Exelby in Wokingham/Woodbridge who is planning on getting her back on the road.